Dubai Financial Market General Index has undergone a remarkable run up to 2005 into highs of 8544 and has ever since not seen these numbers even at the heights of the property bubble during 2007/2008. While the index crashed along international equity markets, however it didn’t manage to stage a recovery post 2009 as the S&P did. Only in Jan 2012, did the index hit bottom at 1294 and rallied slightly over 400% into 5425 in May 2014 which so far remains unchallenged.

I will start off by saying considering the price action from 2005 into the lows of 2012 and then subsequent rally, I am Medium Term (few years) bullish, while long term is yet to be seen as I lack enough data to judge the outlook. In any case, once the ongoing correction since May 2014 is confirmed as done, I would expect another move that is at least the size of the run from 2012 into 2014.

The market however may take several paths and variations on short term. In the view presented below, it depicts that the index has been undergoing a complex correction known under Elliott Wave terms as double Zig Zag, which indicates further weakness ahead into the months to come. This view is confirmed as soon as price breaks 3241.35 to the downside. This is the preferred count especially considering the expected weakness in Oil prices. Further several technical indicators are pointing to further weakness on short term which most likely will lead to breaking the level of 3241.35. The alternative count is given lower priority at this stage and would come into play only if price does manage to hold above 3241.35 and we see price rallying back above 3739 into the zone of 3900 +/-. Only a decisive close above 4253.28 would confirm a multi months advance has been established.

Below I present the weekly and daily counts with potential price target zone over the next few months if presented scenario proves right.

In the two charts below, is the long term outlook on the USD presented. The USD has seen a remarkable run over a period of about 9 months. That has pushed several currencies of developing economies lower which only added pressure to international commodity trade that has already been suffering for several years. The Good news is that usually after such a run, whatever the instrument it is, what follows is a last swing before the trend reverses.

Below I present my preferred count. The alternative count is not much different, however it would indicate that the top is already in place at 100.390 on March 13th, 2015. However, judging on the price action after that point, I am tending towards having one more swing higher that will push the Dollar Index beyond 100.390 putting further pressure on developing currencies and possibly commodities.

As discussed in the last post, relation between USD Index and commodities is by no means linear, however considering the overall fundamentals and general sentiment of the market, I would view that any news on strengthening USD will push traders to sell commodities. A relation that probably will be best displayed in Oil prices in the near term future!

Before I present the chart, I can only say, hold your seats and brace for impact, who survives will be seeing better days soon. 🙂 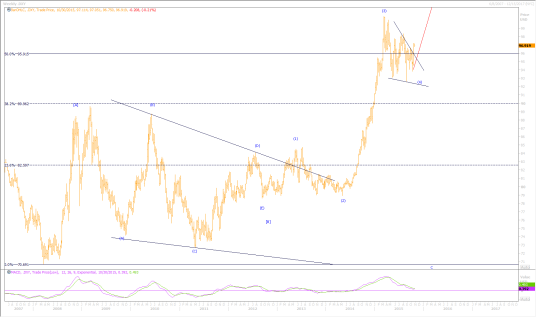 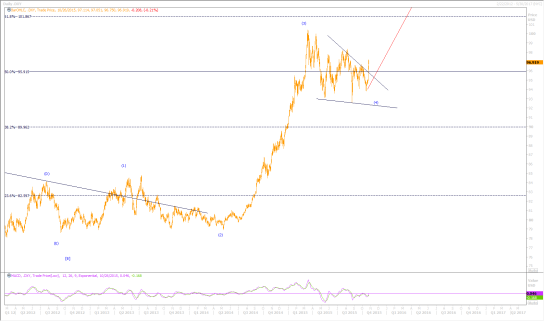 It is true that all commodities now a days are priced in US Dollar. Logically one can deduce that if US Dollar rises then certainly commodities prices would fall. However it seems that the relation is not all that linear as one might think. Actually a correlation study from Jan 2006 to Oct 2015 shows at best a negative correlation of max -0.3290 for Copper and a -0.2096 for Nickel, that is a weak correlation.

This means if Dollar starts rising, it doesn’t at all mean that the base metals group will see immediate fall and the opposite is true. Although Major moves in the USD Index (.DXY), which is a composite of rates of several currencies against USD, do induce a change in mood within Base Metals.

Quick notes and observations for your reading pleasure:

So the relation is not all that linear, and certainly it doesn’t mean that if USD is falling then automatically commodity prices will start rising. It also doesn’t mean that when USD makes new lows and highs that commodity prices would make a new highs and lows.  The correlation that exists is a rather weak one even on timing. It is more a general indicator than a specific one. From the events listed above, one might note as well that commodities, or at least the base metals group, has been leading indicator as to potential turns in the direction of the USD.

In my next article I will be presenting my long term view on USD Index and why I believe that Base Metals and Commodities in General will be changing direction over the next few years.

That said, this however doesn’t imply that the amplitude of the rise and the fall is the same. I have noticed that only the periods coincide. FTSE has been rising from June 24th 2013 to August 2nd 2013, Copper was rising from June 25th to August 16th 2013. Another recent examples FTSE began to fall from 27th April 2015 into August 24th 2015 and copper started its descend on May 5th and weirdly bottomed on August 24th 2015. Although both instruments in these two examples given were on longer term different trends.  Meaning if FTSE makes a new high or low it doesn’t mean Copper will do the same, it only means that it will likely go in a similar direction short term, short term movements tend to coincide time wise.

How useful is this?

This can be used as a proxy indicator, if say it is not clear on one instrument what the next step is, the other instrument might be offering a better clue.
Enjoy!

No wonder that that past 4 years from the 2011 highs in most of base metals, have been among toughest years seen in a while. The only good news is that probably now, near term future might look brighter. Most of the metals have been going through a correction that has exhausted not only prices, but traders as well. It has been turbulent 4 years that probably are just about to be over.

I say just, as it seems we might still have one more shake into 2016. Below I present my views on the various metals in charts, I would be glad to explain in details with price targets for interested parties. The short red lines on the chart, indicate the probable direction over time and potential price zones without specific targets.

There are multiple possibilities on how to count these charts, I have chosen these specific counts after several amendments, I believe keeping the count simple should work best. Alternative counts would indicate that metals are already in early stages of a new bullish rise having bottomed in August. I would gladly adopt that view, however price action so far leaves room for doubt and hence I have settled for the counts presented below: 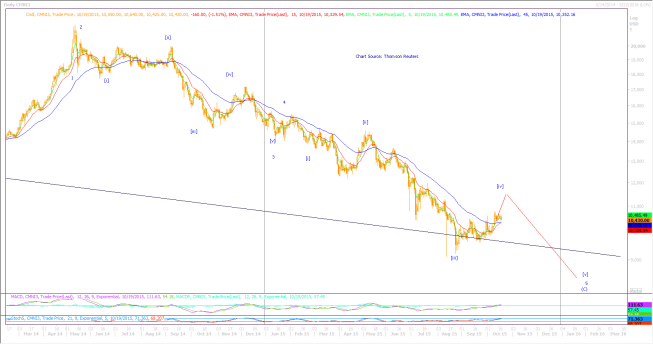 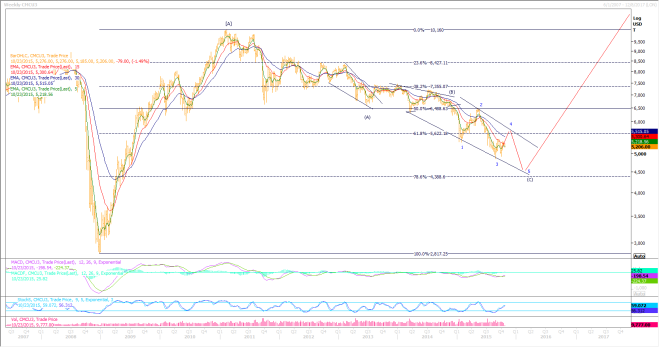 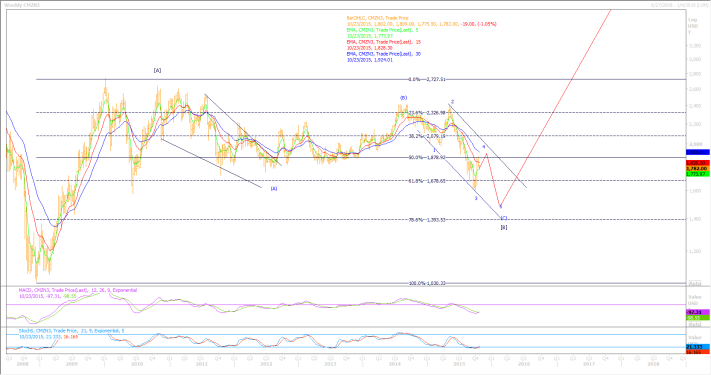 It has been a month since our last post! Mainly due to the not so eventful price action. Prices traded in range throughout Sep. In our last post, I was looking for price to tick a little bit higher before resuming larger downtrend.

Price did travel higher after the post however peaked at 10475 and then drifted lower over the course of 12 days to 9605 to again go higher and peak at 10595.  Price somehow worked out as foretasted to hold above low of 9215 and peak by end Sep (price peaked on Oct 1st) but certainly momentum was weaker than expected and price did not come close enough to 11000.

That said it remains open to be seen if 9215 could hold through October as well. I don’t have my hopes high on this possibility. Fruther range trading expected in October.